On January 29, 1996, St. Joseph Police Officer Brian Klinefelter was shot and killed in the line of duty by one of three armed robbers who had, just prior, robbed a liquor store in the nearby town of Albany. 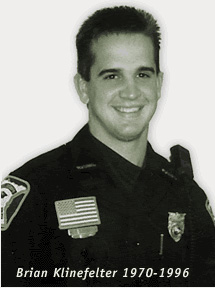 Brian was born on April 15, 1970 in Neillsville, Wisconsin. After living in Stillwater, Minnesota, and River Falls, Wisconsin, he and his family moved to St. Cloud in 1985. Brian graduated in 1988 from St. Cloud Apollo High School. In 1990, he graduated from the St. Cloud Technical College with a degree in Architectural Drafting. In the fall of 1991, he decided to fulfill a lifelong dream and enrolled in the Law Enforcement Program at the Alexandria Technical College. He graduated in May 1993 and was hired by the St. Joseph Police Department as a full-time patrol officer.

In April of 1994, Brian married Wendy Schneider, his high school sweetheart, and made his home in Sartell, Minnesota. On November 15, 1995, they welcomed into the world their first child – a little girl they named Katelyn.

During his two and a half years as a police officer, he was nominated for “Officer of the Year” for talking an armed, suicidal male into surrendering. He was in charge of the St. Joseph Police Reserve Unit. He took a special interest in the Reserves because he served in this unit prior to becoming a full-time police officer in St. Joseph.

He was known by his colleagues and friends for his enthusiasm for his profession, as well as life. Brian was well known and respected by the citizens of St. Joseph. The citizens he swore to protect remember his kindness, professionalism and friendliness.

The Brian Klinefelter Memorial Scholarship was established in 1996 not only to keep Brian’s memory alive after he ...

Proceeds benefit the Brian Klinefelter Foundation and its mission to grow great kids through efforts such as its Family ...